This article is also available in: French Dutch 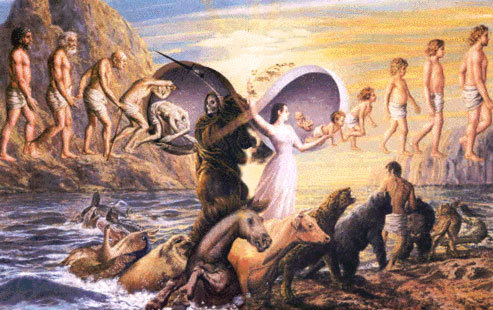 Reincarnation literally means ‘to be embodied again’, and is the process by which the soul travels from one body to another in successive lives. It is a commonly held belief in many of the world’s spiritual traditions – especially those of the east such as Buddhism, Hinduism, and Taoism.

Reincarnation is elaborately described in Vedic Literature, particularly in the Bhagavad-gita:

As a person puts on new garments, giving up old ones, the soul similarly accepts new material bodies, giving up the old and useless ones. — Bhagavad-gita 2.22

Changing from one body to another is similar to the experience we have even within our present body as we grow up and our body changes from a baby-hood, to a childhood, to a youth, and finally to old age. As these changes happen naturally, so we also pass into another body at death.

It is described that when someone finds tranquility with this process, and comes to realise him or herself to be a spiritual being residing in “the city of the body” then he or she is not bewildered by the transformations of the body and attains real peace.

However, since the soul is eternal then unless this process of reincarnation is stopped it can go on eternally. Therefore, according to the Vaishnava tradition reincarnation is a cycle that needs to be broken. Getting caught up in this cycle of birth, death, and rebirth is not the point. Thus, when the subject of liberation is discussed, it means liberation from this perpetual cycle.

The process of Krishna consciousness is aimed at attaining liberation from the natural difficulties that life brings, and of attaining an eternal spiritual life.

If you would like to learn more about reincarnation there is a very good book on the subject called Coming Back.

As we live through thousands of dreams in our present life, so is our present life only one of many thousands of such lives which we enter from the other more real life, and then return after death. Our life is but one of the dreams of that more real life, and so it is endlessly, until the very last one, the very real, the life of God.” — Count Leo Tolstoy

To fully understand the process of reincarnation, it is essential to also understand karma.

Due to the ongoing crises and to follow government regulations, Radhadesh is closed to the public, till further notice.

In the heart of the Belgian Ardennes, near Durbuy, lies the fairytale castle of Petite Somme. The Château has a long history and now houses the spiritual community, Radhadesh Ardennes. The new residents have thoroughly restored the castle and transformed it into a true spiritual oasis where you can explore the colourful culture of the Indian tradition. The Château is now one of the main attractions of the Ardennes and is open to visitors every day. What can you do in Radhadesh Ardennes? We offer daily tours of the castle, where a guide tells you more about the rich history of the Château itself, explains the Indian culture and religion, and lets you enjoy the wonderful view over the Ardennes and a traditional Indian dance performance. For more cultural immersion you can visit MOSA - the … END_OF_DOCUMENT_TOKEN_TO_BE_REPLACED

Srila Prabhupada (1896–1977) is the founder-acarya of ISKCON. Srila Prabhupada was born in Calcutta, India. He studied in British schools under colonial rule and finally went to university in … END_OF_DOCUMENT_TOKEN_TO_BE_REPLACED

The latest photos from Radhadesh, its surroundings, the castle, area, its residents and various events and festivals. Darshan Photo's The most

The public celebration of Lord Krishna’s birth will take place on Sunday the 25th of August. Please come and celebrate with us!

View our agenda below for the latest special dates and festivals in Radhadesh and other centres in the Benelux. Year Calendar

Radhadesh is in the top 10 of tourist attractions in the Belgium Ardennes. Leave your comment at TripAdvisor!

Hare Krishna! We use cookies to ensure that we give you the best experience on our website. If you continue to use this site we will assume that you are content with it.Ok